The operative word in Agile Development Team is “Team.” The experience is a team effort, which is sometimes fraught with friction, particularly at the beginning of a project. But, according to the online journal Mind Tools, this behavior is normal among independently creative people who’ve gathered to complete a common task.

In the journal’s article, Forming, Storming, Norming, and Performing – Understanding the Stages of Team Formation, tools are offered on how to resolve conflicts quickly so the team can reach its “performing phase” and ultimately make you proud.

Psychologist Bruce Tuckman first came up with the phrase “forming, storming, norming, and performing” in his 1965 article, Developmental Sequence in Small Groups (he later added a fifth stage, “adjourning”). Tuckman uses these terms to describe the path most teams follow on their way to high performance.

Forming a team takes time, and members often go through recognizable stages as they change from being a collection of strangers to a united group with common goals. Bruce Tuckman’s model describes these stages, and when you understand the model, it will help your new team become effective more quickly.

In this stage, most team members are positive and polite. Some are anxious, as they may not fully understand the work the team will perform. Others are simply excited about the tasks ahead.

As leader, you play a dominant role at this stage, because team members’ roles and responsibilities aren’t clear.

This stage can last for some time, as people start to work together, and as they make an effort to get to know their new colleagues.

Next, the team moves into the storming phase, where people start to push against the boundaries established in the forming stage. This is the stage where many teams fail.

Storming often starts where there is a conflict between team members’ natural working styles. People may work in different ways for all sorts of reasons. But, if differing working styles cause unforeseen problems, they may become frustrated.

Storming can also happen in other situations. For example, team members may challenge your authority, or jockey for position as their roles are clarified. Or, if you haven’t defined clearly how the team will work, people may feel overwhelmed by their workload, they could become uncomfortable with the approach you’re using.

Some members may question the worth of the team’s goal, and they may resist taking on the tasks.

Team members who stick with the task at hand may experience stress, particularly as they don’t have the support of established processes or strong relationships with their colleagues.

Gradually, the team moves into the norming stage. This is when people start to resolve their differences, appreciate colleagues’ strengths, and respect your authority as a leader.

Now that your team members know one another better, they may socialize together, and they are able to ask one another for help and provide constructive feedback. People develop a stronger commitment to the team goal, and you start to see good progress towards it.

There is often a prolonged overlap between storming and norming because, as new tasks come up, the team may lapse back into behavior from the storming stage.

The team reaches the performing stage when hard work leads, without friction, to the achievement of the team’s goal. The structures and processes that you have set up support this well.

As a leader you can delegate much of your work, and you can concentrate on developing team members

It feels easy to be part of the team at this stage, and people who join or leave won’t disrupt performance.

Many teams will reach this stage eventually. For example, project teams exist for only a fixed period, and even permanent teams may be disbanded through organizational restructuring.

Team members who like routine, or who have developed close working relationships with colleagues, may find this stage difficult particularly if their future now looks uncertain.

As a team leader, your aim is to help your people perform well as quickly as possible. To do this, you’ll need to change your approach at each stage.

Follow these steps to ensure that you’re doing the right thing at the right time:

Schedule regular reviews of where your team is, and adjust your behavior and leadership approach appropriately. 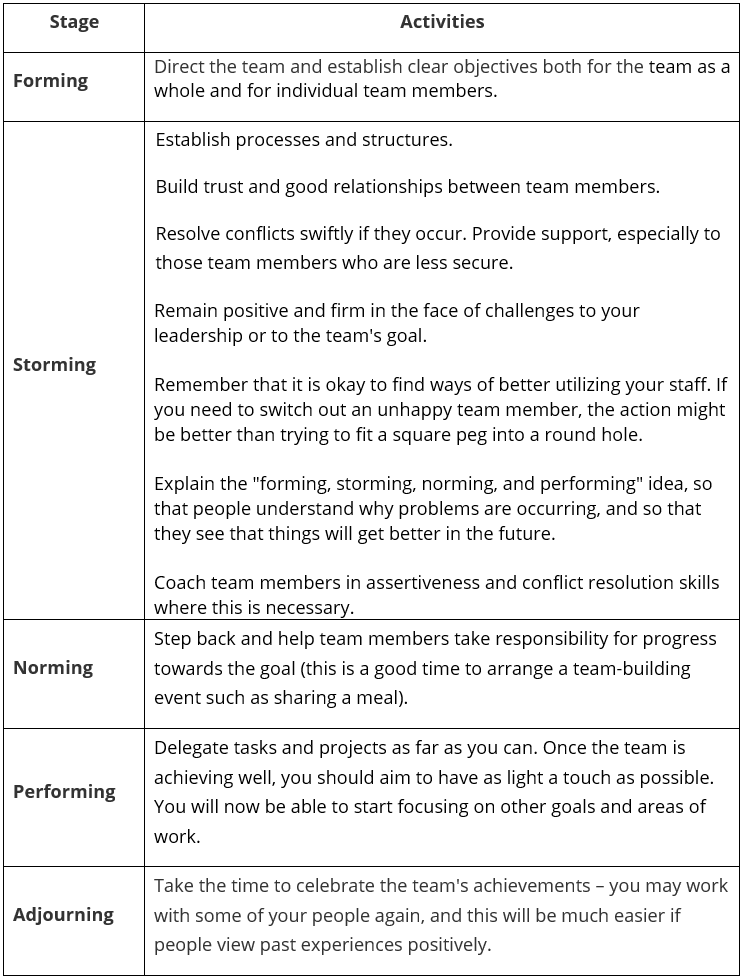 In a perfect world, team members would work effortlessly together from day one. They would get along, communicate well, and productively focus on the team’s mission. Unfortunately, we live in the real world. And, as we know, it takes time for teams to reach peak effectiveness.

We hope you found this information helpful. To read more, visit the online journal Mind Tools.

By submitting this form, you are consenting to receive marketing e-mails from: Trinity Technology Group, Inc., 2015 J Street, Suite 105, Sacramento, CA, 95811, https://trinitytg.com. You can revoke your consent to receive e-mails at any time by using the SafeUnsubscribe® link, found at the bottom of every e-mail. E-mails are serviced by Constant Contact.